I shared the Coke ad on my facebook profile like many others. A friend of mine who enjoyed the ad and its message, but couldn’t understand why everyone who responded with bigotry was branded as being a Conservative. She tried to Google the tweets that followed after the infamous coke commercial and found that there were comments filled with hatred towards Conservatives without any proof that all those bigots were really actually Conservative. Now, this friend of mine is a lovely woman, and I understand that we as humans could differ in our political inclinations and as part of my ideological framework, I have to accept and respect that difference of opinion without being reductive by terming everyone who is a Conservative=racist/bigot/white. I personally detest being   pigeonholed into one term or another. I hate the idea that if you are White, then you must also be Conservative, and if you are non-White, then you cannot possibly be Conservative. Or if you are making bigoted comments, you must therefore be a Conservative. These are not mutually exclusive. So I understand my friend’s frustration at the rapid hatred fired at the bigoted comments following the Coke Commercial on Super Bowl night that it MUST be…it HAS to be all Conservatives.

I also have to accept that although Conservatives attract majority White votes but that is not to deny that there is no Ethnic make up for Conservatives. I know for a fact at least in Canada that there are definitely many Ethnic supporters and Ethnic elected officials who are right-leaning.  I mean how else could we explain the Conservatives winning a landslide in Canada? (oh Right Mass rigging, but that’s a total aside). We can see that the voter bank of the Conservatives in the US is Primarily Non-Hispanic White (check link here again). What this chart proves is that there is just enough colour in the Conservative mix to be termed racially diverse, but it just isn’t enough to really affect decision making, policy shift to challenge the status quo of the White Conservative mandate. I also won’t deny that many policies and bills passed by Conservatives are generally racist and anti-multiculturalism. That happens because there are some deep seeded attitudes and beliefs that are part of the ideological framework, and because of a thing called White-privilege that makes you blind/unaware/not in tune with the struggles of minorities.

At some level there is some truth that your political alliances/preferences do define your ideologies and your framework, but the political process/affiliations are a lot more complex than simply ideologies and policies.  In fact, prior to 2002, most Muslims voted Republican in the US for many reasons, economics being one of them. Having worked in enough election campaigns in BC, Canada myself, I know first hand that in Ethnic heavy constituencies/ridings, Conservatives run Ethnic candidates to split the ethnic vote. It optically looks great, but it also beats having a White Candidate lose to a Non-white Candidate from any of the other parties. The game is to gain the most seats in the House and sometimes that gamble works. Unfortunately, sometimes the skin of your colour is enough to determine your voting alliance over actual policies.

My friend’s frustration posed a challenge to me when she said that her Google search showed more tweets about the reaction to the racist/bigoted comments and not the original tweets of bigotry. I, for one  enjoy a challenge, especially one that doesn’t require much by way of actual physical labour. So I took to the twitterverse and tried to find the bigots cited in all the publicshaming articles. My research showed that some of those users were now either sending protected tweets or had retroactively deleted their old tweets. So, I took my search a bit further. I looked for #cocacola #fail and lo and behold in all its glory I was shown the ugly face of racism rear its head.

I have compiled for your pleasure print shots of the comments hurled in the name of American homogeneity and preserving the purity of the American Race (yeah sounds oddly familiar to the infamous words uttered not too long ago in Europe). But, I do take my friend’s words seriously, I am truly curious whether all those tweeting their hatred for the true depiction of a colurful and multi-ethnic America were really Conservatives? Perhaps, what might be truer is that these people really have no political affiliation, rather an affiliation to ignorance and racism. 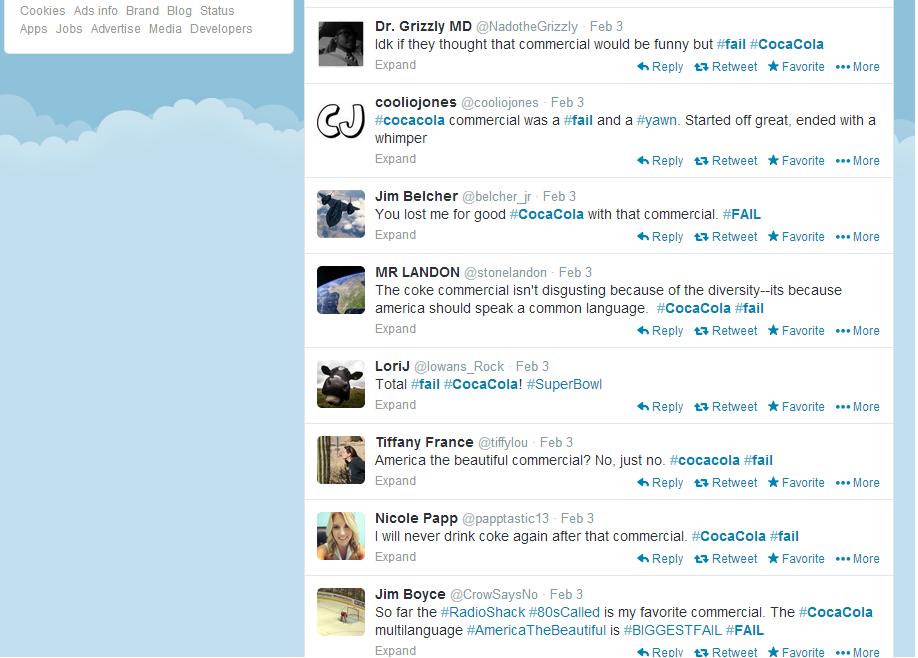 I also found this article: which is by a Republican.. http://allenbwest.com/2014/02/coca-cola-ad-super-bowl-americans-brand-hm/ but he is NOT White, proving my point about enough ethnic support within the conservative folds.

The thing about the internet is that it is addictive. I have now expanded my search from #CocaCola #Fail to looking up the names of the trolls mentioned in the public shaming articles and I keep coming across some serious racist gems. My head is about to explode.

I honestly can no longer be searching for each and every bigot out there and wasting more of my precious time. If anyone is further interested check out the following links: http://www.buzzfeed.com/ryanhatesthis/coca-colas-multi-lingual-super-bowl-ad-inspired-a-racist-mel

I have not yet confirmed whether all these bigots are conservatives, but all I know is that all of them are RACIST, IGNORANT, FULL OF THEMSELVES, GOOD FOR NOTHING FOOLS.

This hashtag that proves that they are IGNORANT!

Some links to cheer you up

I think I am done for today!

View all posts by fieryfury

One thought on “Coke Commercial-Are all bigots really Conservatives?”