I feel an immense rage reverberating through my body—!! Just read that the only ethnic Juror (B29-Maddy) on the Zimmerman case has come out claiming that she knows that “Zimmerman ‘got away with murder’ for killing Trayvon Martin and feels she owes an apology Martin’s parents”. Well, thank you for your apology as that undoes the colossal mistake that you made and the years of oppression and mistrust! Aghh! I am so angry, I can hardly see the screen and hardly type because my hands are shaking in anger. So, I am sorry if what I say in the next few paragraphs make no sense at all. 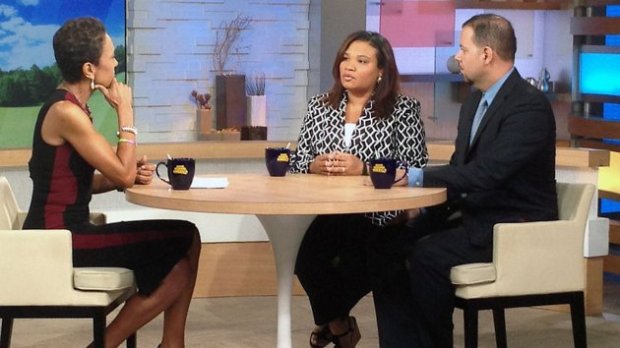 This proves there was so much wrong with this trial–Really don’t care, if someone says it had nothing to do with race, it had a lot to do with race. Zimmerman’s legal team went out of their way to play on the black is dangerous stereotype by painting him in the same manner.  In the original call, Zimmerman is asked by the dispatcher what the ethnicity of the kid is and he says he is “black” (1:03).  The story is about race because it is a white man suspecting a black man of being dangerous. The man has bragging rights for walking away from murder—Not sure how the jurors will live knowing that because of their verdict, there is a guilty man walking around free to kill again!

and this is why the Jury system is so very dangerous!
“Zimmerman concedes he shot and killed Martin in Sanford on Feb. 26, 2012, but maintains he fired in self-defense.
“That’s where I felt confused, where if a person kills someone, then you get charged for it,” Maddy (Juror B29) said. “But as the law was read to me, if you have no proof that he killed him intentionally, you can’t say he’s guilty.”

“As much as we were trying to find this man guilty…they give you a booklet that basically tells you the truth, and the truth is that there was nothing that we could do about it,” she said. “I feel the verdict was already told.”

Law is seldom just black and white (no pun intended)-it is the application of that law that makes it hold any merit or value. A crash course in the form of a booklet is not the best  way of deciding someone’s fate. An ordinary person may not have the knowledge or understanding of the law to its extent (especially when it is presented to them in a shortened version)! Plus, human beings are ALMOST NEVER able to make decisions without other personal factors affecting how they relate to a certain story. We don’t live in a vaccum! The all white panel could NOT have felt the empathy, nor understood the threat the young black man felt as they have not been subjected to years of suspicious scrutiny–It is precisely because of the lack of feeling that scrutiny that we had Juror B37, making a statement on Anderson Cooper’s CNN show, that she believes Zimmerman’s “heart was in the right place” when he became suspicious of Martin and that the teenager probably threw the first punch. This is a classic example of the woman accepting the mainstream narrative that if he is black, you probably should fear him and the likelihood of him throwing the first punch is of a higher probability–never mind that all this testimony was one-sided from the killer himself, since the other witness was buried six feet under anyways!

Juror B29 is a blatant example of groupthink in action in our society. Groupthink “is a psychological phenomenon that occurs within a group of people, in which the desire for harmony or conformity in the group results in an incorrect or deviant decision-making outcome. Group members try to minimize conflict and reach a consensus decision without critical evaluation of alternative ideas or viewpoints, and by isolating themselves from outside influences.” That is exactly what happened here. Juror B29 could have continued not agreeing and they could have deliberated some more, but hey who wants to be the sore thumb standing up against the grain right?

THIS is also the precise reason why we should NOT stop talking about such atrocities. If it feels wrong, it probably IS wrong! And why should the Trayvon Martin story concern any of us, especially if you are not black? Well, because if you are a minority, you better understand and recognize the system of oppression that exists in the form of White Privilege. And why should it concern you if you are white, because there are enough people out there who will use the colour of their skin (white) to use their white privilege whereby putting all of the good white guys and white girls  (and I believe there are More of them than the haters) as part of a big group of people who are complacent. This only adds fuel to the already existing racial tensions that exist in the world and creates further mistrust. Oh and also simply because this sort of injustice is ABSOLUTELY wrong and immoral.

I am not black, but I can relate to the anger my fellow black friends are feeling. This anger comes from a place of being under the lens for far too long as a minority- where my religion and my faith have been put to trial the same way as the colour of their skin. And even though our struggles are different, but the resulting pain and anger is a actually very similar sentiment!!

In the words of rap group N.W.A “F*** the Police,” the law agencies, the jurors, the system of oppression, the oppressors!

Ramadan Reflections: On Faith and Trayvon

My latest post picked up by Muslimah Media Watch

This news at first had me in stitches….Which was an interesting response, given that I usually get mad constantly hearing news that continue to sell the image that Muslims are all terrorists and Islam is a religion of terrorism. So, either I have grown thick skin, or internally accepted this, or just no longer give a hoot about it..Either reason is a bad thing—It means, the media has succeeded in making me accept its false propaganda, or I have become apathetic, and that is never a good thing.

Why is it that any violent acts if termed terrorism must only be in reference to an Islamic or Muslim pretext? Why can’t terrorism be just terrorism- devoid of race, religion, ethnicity, or any other false dividers—There are no excuses for terrorism, no matter what the terrorists use as the reason for their inspiration. We must challenge these notions head on!

I think we need to take a look at why violence is so attractive to young people? Let’s take a quick look at our culture shall we?
We have our kids growing up with Violent video games, violent movies, the hero of the movie is always blowing stuff up and coming out unscathed…the repeated ads to join the Army because well men in military are HOT and macho and it is the epitome of man-hood—not to mention, our authorities repeatedly prove to these young men that violence is the ONLY way to get stuff done—so if Afghanistam, Iran, Iraq, Pakistan, South Korea (insert other countries) don’t comply, we wage a war on them and drop drones!!!!

Yeah, I wonder where they get “inspired” from—

It is time we call terrorism for what it is, rather than trying to define it in reference to Islam only. Terrorist organizations have all existed throughout history, heck some of them even no longer are known as terrorist (Nelson Mandela is a classic example).

These two guys who are arrested may have very well been inspired by the Boston Marathon bombing and therefore the far-stretch of calling them Al-Qaeda inspired. What they really are copy-cat criminals. Not Al-Qaeda inspired.    Al-Qaeda as an organization has been obliterated since 2001…It is more an ideology that has been used to justify violent acts by many across the globe…These two probably don’t even know what that ideology is. So let’s stop calling it Al–Qaeda inspired. The only reason the Tsarnev brothers’ pressure cooker tactic is being copied is because the media went mental in covering them for a couple of weeks. We have idiots all around us, and some of those idiots are just looking for their fifteen minutes of fame. This has now been made possible by our sensationalizing media. There is a HUGE difference between information and sensationalism. This is nothing, but pure sensationalism.

…So, let’s look at violence as violence–anything that intends to harm and cause life loss is terrorism and I don’t care what anyone says to justify it, it does NOT justify it.  We all have a responsibility in how we pass the information on and how we accept it. We need to analyze and not fall prey to immature sensationalism. This is real life, not a movie!

Now, I am angry!! So much for my hearty laugh reaction…